So, at school they are offering this free class twice a week:  kettlebells.  I had no idea what a kettlebell was, but then again, I didn’t know what curling was until a couple of weeks ago thanks to Winter Olympics.  A few teachers had said they had been and it is a good workout, and heck it’s free, so Holly and I decided to check it out today.  A kettlebell is a weight that looks like this: 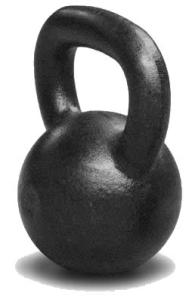 The workout is supposed to be a good workout for your core and your upper body, and since I have been only working my lower body with walking/jogging, I thought this could add some balance.  Holly & I changed after school and showed up in the weight room under the gym at 3:30.  We grabbed a mat and a kettlebell while our leader started some music.

The workout consists of three sets of standing exercises and three sets of floor exercises with 12-20 reps each and 30 second breaks in between sets.  The exercises are things like dead lifts [where you bend over and lift the weight off the floor], overhead lifts, starting the lawnmower lunges [you can probably picture this one], push ups, up and out sit ups, and so on with every exercise utilizing this weight.

Good gosh, is this a killer workout.  Becky said she was really sore a few days after her first workout… I am sore now.  The first set of reps is not that tiring, but subsequent sets begin to wear on you quickly.  Push ups were not as hard as I thought, but sit ups and crunches were awful.  Apparently, I have no stomach muscles– not a one.  No wonder my stomach looks like it does.  On the over and under front lunges, I was completely off in my timing and felt like my arms were getting tangled up in my legs.  At times during this workout, I felt like I was performing physical comedy in a Judd Apatow movie.  Holly was like, “Isn’t this fun, Whitman?”  I was like, “Um, I wouldn’t exactly call it fun.”  It was invigorating though, and a great way to celebrate Holly’s surgiversary:)  Holly is ready to do it again on Tuesday.. I think I might do it again on Tuesday, but I really have to practice those crunches.