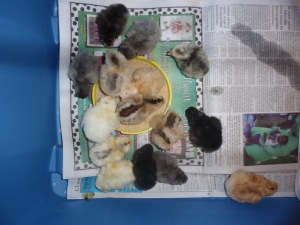 Today is Thursday, May 6th, and the last two days we have just been basking in the warm joy of 16 fluffy chicks to watch and hold and marvel over.  On Wednesday morning we transferred all sixteen to the brooder.  Both Sophia and Tammy were very surprised to find that the brooder is a large blue plastic crate with some wire pulled across the top, some newspaper in the bottom, and a water and food bowl.  I think they were expecting some official sort of brooder… Cathy was like .. I have a brooder at my house too if that is what a brooder is ;). 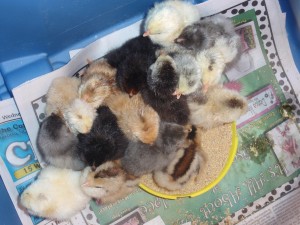 Seeing the chicks for the first time all fluffed out and in the bottom of the brooder was such a thrill.  They are so colorful and already have personalities.  We immediately began to name certain chicks.  Uno was what I called the firstborn gray Bantam, and Beyonce earned her name because when she was born she had a big backside that caused her to fall over.  Moe immediately named one after himself that he found captivating– one of the chipmunk looking chicks.  We named the another one marked like that with softer lines, Mocha.  Melissa is a black chick with a red head.  Of course Mumble is our special chick.

It is completely appropriate that we ended up with at least one special chick.  As we were trying to hand feed Mumble the first time and talking about his ‘disability,’ Moe Moe commented; “we can get a check for that one.”  We lost it completely.  These kids are so funny.  Today right before lunch Mumble began to make this high-pitched plaintive chirp that got my attention.  I wondered if he was just beginning to have some hunger pains, so we held him over the table on a paper towel and began to feed him and offer him water with a plastic spoon.  His bottom beak is exposed and like a narrow bowl and when you drop some mash into it he can rake it into his mouth with his long tongue.  He lapped up the food and the water until he was full enough to stop all that loud peeping.  We fed him several times more today, but we are trying to teach him how to do this himself.  He is not going to be able to peck at his food.  He will basically need to use his beak as a shovel and then use his tongue to get it the rest of the way into his gullet.  He seems to have an easier time getting water.  Our other school nurse, Lindsay, fed him a couple of times today but she gets so sad over him.  He doesn’t make me sad.  I just hope he can learn to eat in a way that will allow him to thrive. 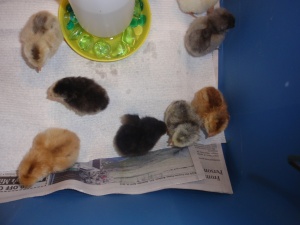 Our room has frequent visitors in and out all day long.  Everyone wants to see and hold the chicks.  The regular education kids are hilarious as well with their comments and questions.  One girl this afternoon asked me if they were ‘going to get to be big chickens?’  I am really not sure what she even meant by that.  Half of them want to take one home and keep it in their bedroom.  I remind them that in less than 5 months they will be great big hens and roosters and much less adorable.  In fact, I just kept marveling yesterday that they were the cutest they were ever going to be.  Today you can already see some feathers emerging on the wings and they seem bigger in one short day.