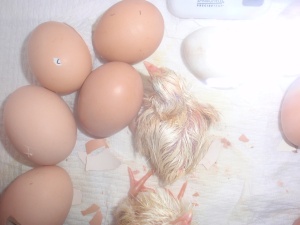 I was too tired to blog yesterday since I stayed at school until midnight the night before birthing babies. By the time I got home last night there were 16 chicks and that is the final total out of 23 eggs.  That is a 70% return and I am over the top excited, surprised, grateful for that number.  They are such a beautiful, diverse, little flock and we even got a special chick in the bunch.  But, let’s go back so I can get all this in.

Yesterday, when I arrived to school, three more chicks had been born in the night bringing the total of chicks to 5 at 7:30 am on May 4th.  At about 8 am we had another birth and by midday we had 9 chicks.  Our classroom was like a zoo with people coming and going all day to see the chicks being born.  Students could not stay in their seats and went back and forth all day to the incubator to watch for new hatchings. 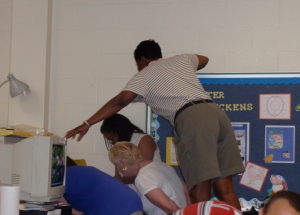 The chick pips a single hole in the shell and then breathes air for the first time. After resting and acclimatizing, the chick will begin to use the egg tooth to zip open the egg in a circular fashion then they begin to stretch and kick.  Eventually, the egg begins to move and roll back and forth as the chick rocks its way out.  Finally, near the end of this process in a matter of moments the chick makes a few final big moves and slips from the shell.  After this, the wet and tired chick will sort of lie in a heap until it regains enough energy to try its legs at walking.

Each time a baby chick was born we would remove the eggshell from the incubator and sometimes it had a bit of afterbirth in it.  During one birth mid-afternoon, a chick was born who had its yolk sac still attached to its umbilicus and there was some blood.   The sac is supposed to be sucked up into the chick through the umbilicus right before hatching and this is what sustains the chick during the first two days of life.  This little bloody chick was freaking me and Sophia out enough, but on top of that the other chicks were pecking at the sac like they were eating it and so I ran for the school nurse [who is also our chicken expert and the egg donor]. She picked it up and sort of detached the sac gently and we put the little bloody chick into a paper towel lined plastic container so that it was separated from the others.  I was really worried about this chick, but he was right as rain by this morning and joined the others.  I actually knew he was okay when he stopped bleeding, fluffed up, and was trying to jump out of the cup and join his siblings.

I came back to school after supper and a couple more chicks had been born, when I noticed that one of the chicks had a deformed beak– the bottom of the beak points one direction and the top beak points in another direction entirely.  I quickly googled this condition and found that it is a caused by a genetic fault and chicks born like this are commonly called crossbeaks.  The color of this chick is unique as well.  He has a dark underfluff with yellow on top of that so that it makes him look sort of evergreen or green-gray sometimes.  In the morning, Ms Burton recalled the chick that was different in Happy Feet named Mumble and so we named him Mumble.  I stayed at school that night [Tuesday] until 11:30 witnessing what turned out to be the last chick birth.